Thanks to a $24,000 grant from DTE Energy Foundation, GSSEM is offering valuable STEM experiences to an increased number of Girl Scouts, while also providing low-income families with programming in STEM, Outdoors, Life Skills, and Entrepreneurship.

A portion of the grant supports GSSEM’s Girl Engagement Initiative (GEI) that serves girls (grades K-8) in communities such as Detroit, Downriver, Flint, Pontiac and Port Huron, where families often face transportation issues and financial barriers which prevent them from joining Girl Scouts.

In addition to providing STEM training, GEI provides girls with outdoor education, teaches financial literacy skills, and helps them to learn life skills they will use throughout their lives.

The other portion of the grant supports those Girl Scouts who learn about STEM by participating in GSSEM FIRST Robotics teams.  Girl Scouts can participate in Junior FIRST LEGO League (JFLL) teams (grades K – 3) and FIRST LEGO League (FLL) teams (grades 4-5). The teams will conduct research on the Challenge topic announced by FIRST and create a LEGO model to solve a problem related to the Challenge. The FLL teams have more extensive requirements. The teams will program an autonomous robot to score points on a themed playing field (Robot Game), and develop a solution to a problem they have identified (Project). Teams will also attend a FIRST tournament. The teams will display their project and present on their research at the GSSEM FIRST Robotics Expo.

GSSEM also supports a FIRST Tech Challenge team, Girltastic, and is looking to start another. Girls in grades 6-8 build and program a semi-autonomous robot that competes in a themed game over the course of 2.5 minutes. 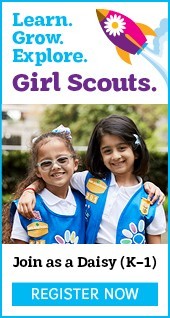